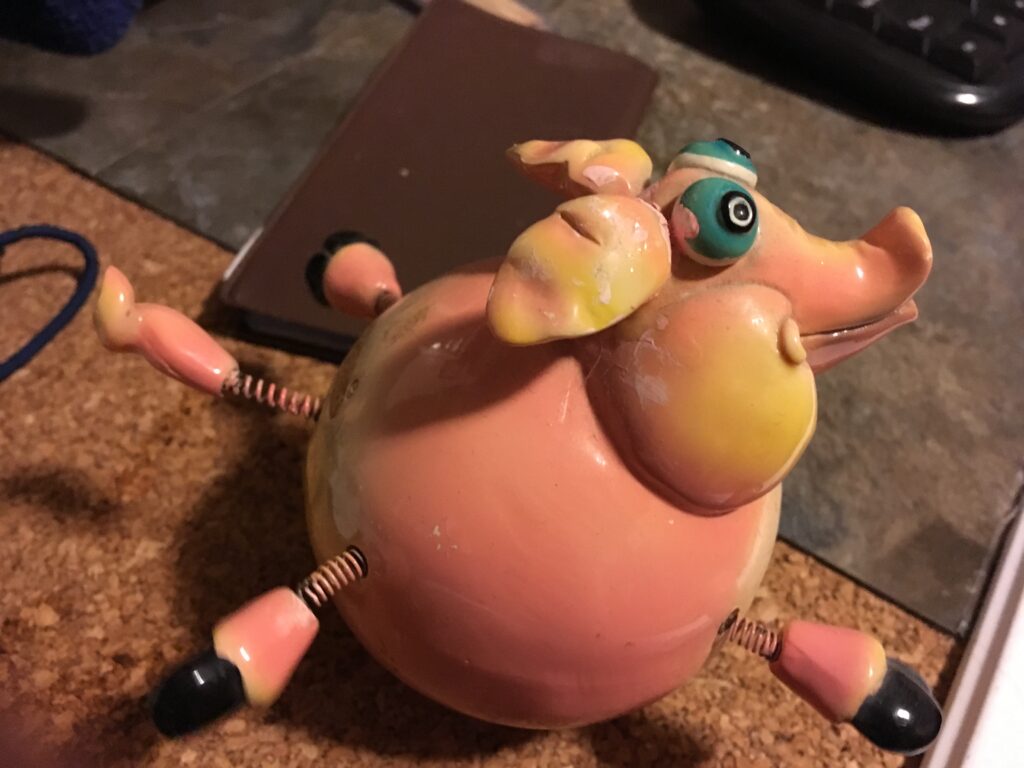 Some time ago I gave my father a gag gift of “The Pink Pig.”  I loved it, and we shared a love of oddities and kitsch that many other folks just don’t “get”.  But it never failed to make both of us smile when we saw it (same for the parrot, but that’s another story).  When he died, I asked for, and received the pig (and the parrot) as part of my inheritance.  I brought “Heinold” (named for the former commodities brokerage where my sister worked when I was in high school.  They had pig races at the state fair every year.  The winning pig was the only one who got an Oreo cookie and those little porkers raced like crazy to try to get it.) home and one of the cats immediately played with it and broke off his ear.  I glued the ear back on and took the pig with me to my office where it would be “safe.”

There were those there who did not believe that Heinold fit in with the décor.

BUT, something interesting happened.

Most people do not come to a law office when they are happy.  If they come in, it’s because something is wrong, or they’re afraid it’s going to go wrong, or they’re preparing for “the worst” etc.  Particularly when it is a practice that does criminal defense and divorce, the clients are NOT cheery.  Probate practices means they’ve lost a loved one.  NOT cheery.

BUT everybody loved the pig.  They’d poke him, watch him wobble, and inevitably smile.  One woman said it was the first time she’d felt like smiling since her Dad had died.

I have since changed jobs and moved to Topeka.  People here are, on the whole, a bit cheerier for the most part (not a law practice, no divorces, no criminal charges . . .).  But I decided to bring in Heinold since I have my own office and can decorate it any way I please.  When I did, my co-workers laughed, poked him, watched him wobble, and left smiling.

Heinold is apparently a magical pig.

I can live with that.

Dad would be so proud.